The Douglas A-4 Skyhawk is a carrier-capable light attack aircraft, and one of the most effective and longest-serving aircraft in the world.  Its adoring pilots have given it dozens of nicknames in its time: Heinemann’s Hotrod, the Bantam Bomber, and Scooter, among many others.

The Skyhawk, originally designated the A4D, was designed to replace the storied-but-slow A-1 Skyraider as the Navy’s light attack bomber.  The project was assigned to famous Douglas designer Ed Heinemann, and what emerged from his drawing boards was an aircraft for the ages: small to save room aboard cramped carriers, capable of carrying more bombs than a WWII B-17 Flying Fortress, nimble enough to dogfight with anything in the sky, and able to bring its pilots home despite ferocious damage.

The A-4 came of age during the Vietnam War, where it carried both Navy and Marine pilots into the dangerous skies of Southeast Asia.  362 Skyhawks would be lost to all causes during the conflict, including that of Everett Alvarez Jr., the first US aviator to become a POW, and those of two aviators who would later rise to national fame: Senator John McCain of Arizona, a former presidential candidate, and Admiral James Stockdale, Medal of Honor recipient and former vice-presidential candidate.  Skyhawks also flew into combat for Israel in several conflicts, for Argentina in the Falklands War, and for Kuwait during the Iraqi invasion and subsequent Operation Desert Storm.

Perhaps more famous to most visitors will be two very public roles the Skyhawk played.  First, it was the chosen mount of the US Navy’s Blue Angels aerial demonstration team for almost twelve years, until being replaced by the F/A-18 Hornet in 1986.  Second, they jockeyed for attention and “kills” as the aircraft flown by the instructor pilots in the 1986 Paramount film Top Gun.  Indeed, it was in this real-life adversarial training role that the Skyhawk would conclude its US service after almost 50 years in 2003.

Despite being designed in the early 1950s, the Skyhawk was in production for twenty-five years – even longer than the F-4 Phantom II. 2,960 examples were built, eventually serving with the militaries of eleven nations. In addition to a number of civilian-owned examples, two of those nations, Argentina and Brazil, continue to fly it to this day. Incredibly, Brazil looks to shortly be flying the type from an aircraft carrier once again, more than sixty years after the type’s first flight!

The A-4E, the variant displayed by the Museum, featured a more powerful engine than previous versions, an additional two weapons stations (for a total of five), and vastly improved electronics. Its increased power and strengthened airframe were major factors in its longevity in the notoriously punishing adversarial role.

One of the Museum’s three A-4E Skyhawks, 0023 is probably our most famous, having flown for sixteen years at the Navy Fighter Weapons School at NAS Miramar, better known as TOPGUN. Accepted by the Navy on 29 April 1963, her history begins with nearly two years with VA-43. After a couple months filling the roster of VA-44 she was sent to VA-12; with them in 1966, aboard the USS Franklin D. Roosevelt, she flew her first of two tours over Vietnam. From there she was assigned to VA-153 for a short period, before being handed off to VA-94 for a deployment aboard the USS Bon Homme Richard, her second Vietnam tour, during which VA-94 flew many missions in support of Marines fighting in the Battle of Khe Sanh. After short stints with VA-125 and VA-195, she started her special projects career, first with Air Test and Evaluation Squadron VX-5, and then the Naval Test Pilot School, before moving to Miramar and becoming “TOPGUN 56” in 1974. Photos of her abound on the Internet, in numerous paint schemes, from her time there, and she was reportedly the chosen ride of Vietnam ace Randy “Duke” Cunningham while he was an instructor there. She became a Barbers Point VC-1 bird in 1990, and remained until she was retired in 1992.

These two aircraft spent most of their careers together, barring a temporary break-up, before ending their careers at the Museum.

All three of these aircraft are on loan from the National Naval Aviation Museum, Pensacola, FL. 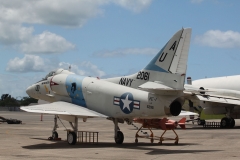 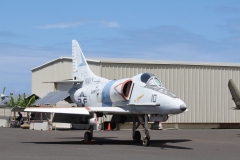 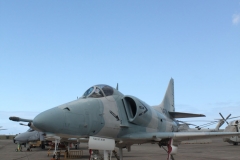 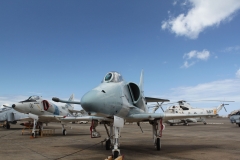 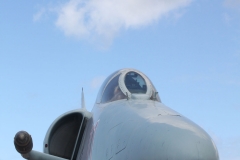 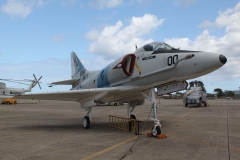 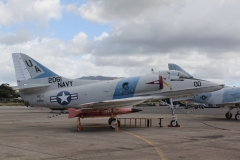