Like many Navy patrol squadrons, the modern VP-1 – the fifth squadron to carry the designation – has its roots in the middle of World War II.  Established on 15 February, 1943 as bombing squadron VB-128, the squadron was immediately tasked to the role which would dominate its career, hunting submarines and escorting surface ships near America’s east coast. Flying the trusty PV-1 Ventura, they patrolled where duty called, flying from Cuba, Florida, New York, Iceland, and Puerto Rico, claiming the destruction of submarine U-279 in October. In September of 1944 they began transitioning to NAS Kaneohe Bay, Hawaii, and continued to see action in the Philippines and islands throughout the southwest Pacific.

Following the war, they operated from Tinian and Okinawa before rotating to NAS Whidbey Island in Washington state in January 1948. Later that year, they were designated VP-1.  Flying P2V Neptunes, they deployed four times to Okinawa during the Korean War, patrolling for resupply vessels. VP-1 completed a mission vital to the future of naval aviation when they completed a full-squadron around-the-world flight, demonstrating the Navy’s ability to rapidly deploy in force to counter enemy threats. It was a strong argument for the Navy in a time when defense budgets were rapidly shrinking and the Air Force was demanding control of all fixed-wing land aircraft, and they truly earned their new nickname: “Fleet’s Finest.” They would use this nickname until 1985.

VP-1, like most other Pacific patrol squadrons, was heavily involved in operations in Vietnam. They took the first casualties of the patrol community in the conflict when an attack on Tan Son Nhut Airbase claimed one squadron member. They would end up deploying to the combat zone eight times.

In the midst of these deployments, the squadron made a number of important transitions. It began receiving P-3B Orions in July of 1969, and it would be the last active-duty squadron to move from Neptunes to Orions. At this time, they were also the last patrol squadron at NAS Whidbey Island, and were facing dissolution as part of cost-cutting measures to pay for the war. After spending two months in stand-down while the Navy decided their fate, it was decided to retain the squadron and move them to NAS Barbers Point, a relocation which was completed in June of 1970.

In 1980 the squadron sent rotating detachments to Diego Garcia to patrol the Persian Gulf during the Iranian Hostage Crisis. During this time, a separate detachment at NAS Cubi Point in the Philippines was heavily involved in humanitarian operations, assisting with the massive outflow of refugees fleeing Vietnam by boat. The squadron received medals for both.

Tragedy struck the squadron on 16 June 1983 when BuNo 152720 impacted a cliffside on Kauai during a nighttime training flight. All fourteen crew aboard perished.

In 1990, the squadron hearkened back to its roots when they deployed to Diego Garcia in just 72 hours, in the opening days of Operation Desert Shield. They then went above and beyond, sending further detachments to Saudi Arabia and Oman.  Following the conflict, the squadron sent multiple detachments to Panama to assist in counter-drug operations.

VP-1’s time at Barbers Point would end in July of 1995, when they were transferred back to their old home of NAS Whidbey Island once again.

Some trivia on the squadron: VP-1 was the only patrol squadron to be based long-term at NAS Barbers Point to never fly the “A” model of the P-3 Orion; they deployed to NAS Barbers Point four times in the 1950s; they fired the last AGM-12 Bullpup missiles launched by Navy patrol aircraft in July 1978 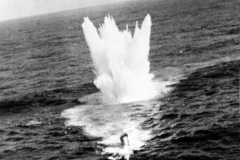 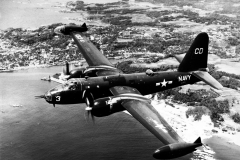 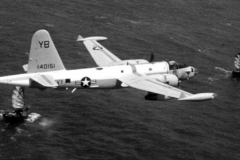 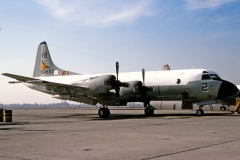 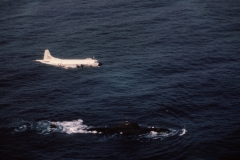 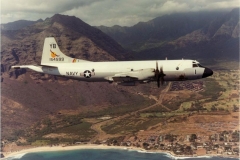