The squadron which was to become VP-28 was established on 1 June 1943, as Bombing Squadron 108 (VB-108).  It quickly established a Hawaiian legacy when its first active-duty homeport became NAS Kaneohe Bay in October.  Flying the PB4Y-1 Liberator aircraft, the squadron deployed to bases the Gilbert and Ellice Islands (later known at Kiribati and Tuvalu), where they performed reconnaissance and “attacks of opportunity,” sinking numerous enemy vessels and making the first bombing raid against Wake Island.  They moved again to the Marshall Islands in April 1944, where they claimed enemy submarine I-174 before being relieved in July.  A period of refit and training at Kaneohe and in California, during which time they became VPB-108, culminated in the assignment of PB4Y-2 Privateer aircraft and deployments to Palau, the Marianas, and Iwo Jima.

Following the war, the unit spent a few years stationed in Okinawa (briefly designated VP-108 and VP-HL-8) before returning to NAS Kaneohe in 1948. Later that year they would be re-designated as VP-28 and would move across the island to their final home at NAS Barbers Point on 10 July 1949.

The squadron received P2V Neptune aircraft late in 1952, finally retiring their WWII-era Privateers.  Their first years with the new aircraft were largely uneventful, with deployments to Japan and Alaska. The squadron’s tail code was changed to “QC” in the middle of 1957. In July of the same year, the Warriors suffered a tragic loss when a failed engine just after takeoff caused a crash and the loss of all eleven on board.  It was one of three crashes for the squadron that year; the others resulted only in injuries, despite one being a spectacular cartwheeling crash on landing.

In 1962, the squadron deployed to Christmas and Johnston Islands to provide reconnaissance for nuclear tests in the area.  Their crews and aircraft flew over 450,000 miles during the deployment.  In 1964, they deployed with their Neptunes for the last time in 1964, flying missions in the Gulf of Tonkin, during which they would set a record for patrol hours in a single month. Later that year they received their first P-3A Orions, fully transitioning to the type within five months.  Late in 1965 they would return to the Gulf of Tonkin, where they would re-break their records in support of Operations Market Time and Yankee Team.

In 1967, VP-28 dropped ordnance on a highly unusual target. A ship off the coast of Alaska, rigged with explosives for testing, had drifted off station before sinking, resulting in a failure of the explosives to detonate. The squadron dropped twenty-four 2,000-pound bombs attempting to set off the explosives. When they stubbornly refused to detonate, the Navy declared that the ship had been flattened and the explosives dispersed to a point where they were no longer a hazard.

The squadron’s final deployments were to Japan and Vietnam before it was disestablished on 1 October 1969. 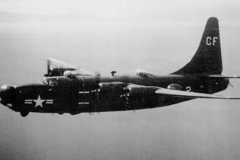 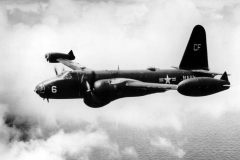 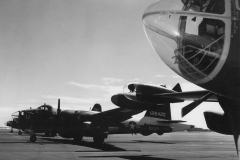 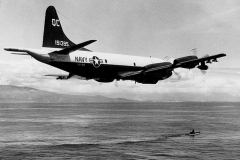 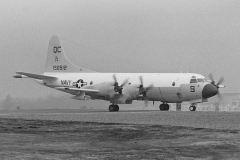