One of the first generation of jet airliners, the Douglas DC-8 was a highly successful design with a long and storied career. It always existed in the public shadow of its rival, the famous Boeing 707 (which preceded it in flight by a mere six months), but it was well-loved by its pilots and proved a reliable performer for its airlines.

Following World War II, a glut of former military aircraft, combined with a number of cargo aircraft designs which were easily redesigned to carry passengers, meant that the market was firmly committed to piston-engined designs. Douglas themselves were at the front of this pack with their market-leading DC-3, -4, -5, -6, and -7 designs, and the company showed little interest in marketing a jet airliner, despite some preliminary studies and design work. The forthcoming Boeing 707 pushed Douglas to take their designs from concept to reality, and when Pan Am ordered both designs, the airlines rushed to avoid being the last to have jets in their fleet.

Through the years, the type was modified again and again, gaining longer fuselages, more passenger and fuel capacity, more powerful and efficient engines, and eventually even modern cockpits.

Though the DC-8 did not benefit from the numerous military conversions that boosted sales of the 707 airframe, Douglas still built 556 examples of their airliner between 1958 and 1972, when it was succeeded by the next generation of efficient, long-range widebody airliners like Douglas’ own DC-10 and rival Boeing’s 747.  DC-8s would soldier on in service, being handed down from prestige airlines to subsidiaries and smaller operations. Many were converted to partial cargo (“combi”) or full cargo configurations, flying with major cargo operators like UPS and FedEx. Ironically, the 707’s name recognition was no match for the DC-8’s flexibility: the Douglas aircraft’s ability to accept modifications gave it a substantially longer career with the major airlines and cargo carriers than that of the Boeing.

One of the most interesting claims to fame for the DC-8 is its place in aviation history as the first airliner – indeed, the first civilian aircraft – to travel faster than the speed of sound, reaching Mach 1.012 in a dive during testing in 1961, nearly eight years before the first flight of the Concorde.

The Museum is the proud final home of “Little AMI,” who still bears her final registration of N799AL.  Completed on December 21, 1967, she entered service with SAS Scandinavian Airlines in February of 1968, where she flew for almost twelve years as “Skjold Viking,” registration OY-KTE. After another three years with subsidiary Scanair (now renamed “Turid Viking”), she spent short tours with Arista International and Northeastern International, where she was dubbed “Katie” after her registration.  The former Viking must have felt out of place in her next home, tropical Thailand, where a short period with Thai Airways became four years with the Royal Thai Air Force, serving as an executive transport.  Despite becoming an American-owned aircraft, the tropics remained her home for another seven years: after a few months with Hawaiian Airlines, she was dubbed “Little AMI,” after the initials of Air Marshall Islands, whose livery she then bore.  Finally, after a little less than two years with Zantop, she was acquired by Air Transport International, who operated her for fifteen years until her retirement to the Museum in 2013, one of the very last of her type flying.

In addition to her Hawaii history, “AMI” also bears the distinction of being the last DC-8 to operate a passenger flight, a charter for a few dozen very lucky passengers on her trip to the Museum. She also has an important footnote in the tale of NAS Barbers Point, being the last cargo aircraft to fly from the station before its handover to the State of Hawaii and conversion to Kalaeloa Airport.

The Museum’s DC-8 was built as a -62, part of the “Super 60” series, with a moderately-stretched fuselage and a wider wingspan than her predecessors. She was later converted to a -62CF “combi” configuration, combining a large cargo area with six remaining rows of passenger seating  – as such, she’s an excellent example of both configurations. Even better for a fan of old aircraft, despite being one of the last of her kind in the air, she was never converted to use more modern engines, and never received an updated cockpit, remaining gloriously old-fashioned to the very end. 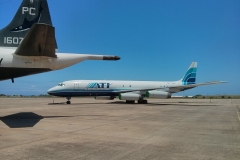 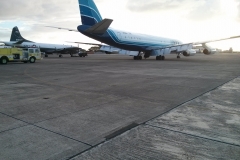 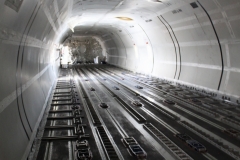 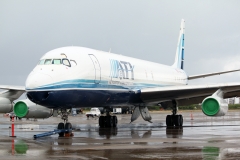 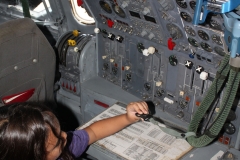 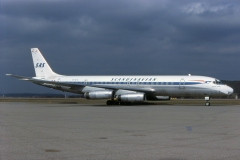