One of the most successful jet fighters ever, the McDonnell F-4 Phantom II was the do-anything workhorse of nations the world over.

Originally developed as an advancement of the gorgeous, but only modestly successful, F3H Demon, the design which would become the Phantom was tweaked to a new Navy requirement for an all-weather fleet defense interceptor. It was fitted with a second seat for a radar operator and recesses for four then-new Sparrow air-to-air missiles. Wind tunnel testing showed a number of looming instability issues, which were solved by angling the wingtips up and the tailplanes down. The first prototype flew in May of 1958, and it was accepted for service in the waning days of 1960.

The Phantom is one of the only fixed-wing aircraft used by all three flying branches of the US military. Robert McNamara, Defense Secretary under Presidents Kennedy and Johnson, pushed hard to consolidate aircraft designs between the branches, and the F-4 won a fly-off against the F-106 Delta Dart to become the common interceptor platform. The Air Force, however, developed its own variants of the Phantom, focusing on providing them with bombing capabilities in addition to their air-to-air missiles. (The US Marine Corps used the same variants as the Navy.) It also has the distinction of being the only design used by both services’ flight display teams, with both the USAF Thunderbirds and the Navy Blue Angels flying the Phantom from 1969 to 1973.

When first introduced, the F-4 quickly gained the notice of the world by breaking 16 records for top speed, altitude, and time-to-altitude between 1959 and 1962.  Its official speed records remained unbroken until 1975, when they were finally claimed by the F-15 Eagle.

The Phantom is most famous for its duties during the Vietnam War, where it was used as an air superiority fighter, an attack aircraft, a reconnaissance aircraft, and a “Wild Weasel” platform hunting enemy surface-to-air missiles. Despite superior equipment, Phantom pilots struggled mightily against the North Vietnamese MiGs, which were smaller, lighter, more maneuverable, and armed with guns – an disadvantage for the F-4s, whose missiles proved woefully inadequate. While missile manufacturers rushed improved models into combat, the services themselves developed improved training programs (including the famous Navy Fighter Weapons School, known popularly as “TOPGUN”). Largely due to these changes, the Phantom became the mount of all five men to be credited as “aces” during the war (for downing five or more enemy aircraft), with two pilots and three radar operators receiving that title. F-4s of all three services also served dutifully as fighter-bombers, where they also received the highest losses: in total, 590 Phantoms were lost in combat (over 90% to ground fire), and another 144 in non-combat accidents.

The Phantom would continue to fly in active service clear into the 1990s, with F-4G Wild Weasel and RF-4C reconnaissance models flying in Desert Storm. Once surplussed from active squadrons, many were converted to drones and expended as targets. Almost two dozen of these are still flying for the Air Force, due to finally be retired in 2017.

5,195 F-4 Phantom IIs were eventually produced. It saw service with twelve nations, was only retired by Germany in 2013, and still flies today with Greece, Iran, Japan, South Korea, and Turkey. Adding even further to its legendary status, Phantoms of both Iran and Turkey continue to see combat, half a century after the type first flew into harm’s way over Vietnam.

The Museum’s Phantom was originally an F-4B, accepted on 20 August 1965. She was first assigned to VF-31, including a deployment aboard the USS Saratoga, and later with VMFA-312, training crews who were en route to Vietnam. In 1973, she was upgraded to an F-4N under “Project Bee-Line,” receiving new engines and electronics, and assigned to VMFA-314, and then to training squadron VMFAT-101. She was given one last, short tour aboard ship with VF-154 in 1983, serving three months aboard the venerable USS Coral Sea, whose deck was unable to handle the larger, heavier F-14 Tomcat. During this cruise, she came to NAS Barbers Point with a mechanical issue, where she remained permanently, eventually becoming one of the Museum’s original five aircraft in 1999. 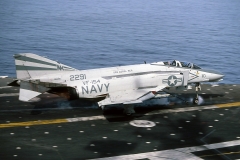