The CH-53 has been the draft horse of the US Marine Corps, an immensely powerful helicopter that has proven its capabilities again and again.

Developed in the wake of a previous failed heavy-lift program, the Sea Stallion edged out the CH-47 Chinook, already in use by the US Army, for the contract. Despite snags during development, the new helicopter breezed through its testing and entered service in 1966. It quickly found its way to Vietnam, serving not just as a heavy lift and troop transport helicopter, but also recovering crashed aircraft, sweeping for mines with the US Navy, and saving downed airmen with the US Air Force. The intense heat of the jungles of Southeast Asia led the Marines to ask for an improvement in engine power to compensate, giving birth to the CH-53D in 1969. Both A and D models continued to serve through the very last days of the war, and Sea Stallions saw round-the-clock duty during Operation Frequent Wind, the evacuation of personnel during the Fall of Saigon.

Despite the prevailing peace, Sea Stallions continued to find action post-Vietnam.  They were the helicopter component of Operation Eagle Claw, the disastrous attempted rescue of hostages from Iran in 1980. More successfully, they supported the Marines in Lebanon, fought during Operation Desert Storm, and performed heroically in the War on Terror in both Afghanistan and Iraq.

The Sea Stallion is a truly amazing machine. It’s the largest helicopter in the world outside of Russia, and is capable of carrying up to 13,000 lbs (5,900 kg) of cargo like HMMWVs or 155mm howitzers.  Despite its size, it’s shockingly maneuverable, being capable of performing both rolls and loops, maneuvers that are impossible for many helicopters even a fraction of its size:

The original A and D model Sea Stallions were supplemented by their offspring, the more powerful CH-53E Super Stallion, following its introduction into service in 1981.  It would take another thirty years, however, before the classic CH-53D Sea Stallion would be retired from USMC service, following a final deployment to Afghanistan in 2012.

Over 500 Sea Stallions were built.  In addition to the CH-53A and D models used by the Marines, the Navy had dedicated MH-53 minesweeper versions of both, and the Air Force flew the search-and-rescue HH-53 “Super Jolly Green Giant” and special operations MH-53 Pave Low. Germany still operates more than 60 of their original 110, Israel a couple dozen, and a few by Mexico. Iran is the other remaining operator, flying not only a few ordered before the Iranian Revolution, but also having returned to service some of the Sea Stallions lost during Operation Eagle Claw.

“Lunatic Fringe” was accepted on 29 August 1969, and was first delivered to HMH-362. She’s had a very rich history, having flown with minesweeper squadron HM-12 for clearance of the Suez Canal in 1974, spending sixteen months assigned to presidential transport squadron HMX-1 during President Gerald Ford’s administration, deployment for the massive multinational exercises TEAMWORK 80 and TEAMWORK 84, assignment to HMM-261 and the 32nd MAU in Lebanon during the Siege of Beirut, flying with the “Ugly Angels” of HMH-362 during Operation Desert Storm (during which time she bore the nickname we now call her), and relief missions in Africa. Her final duty was with HMH-463, who retired her to the Museum in 2001.

156964 is currently being prepped for painting, with the intention of returning her to a late ’70s Marine green with low-visibility markings. 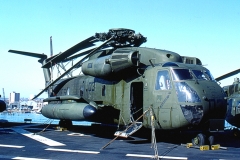 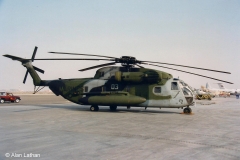 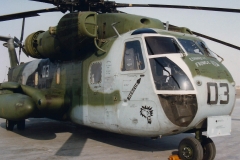 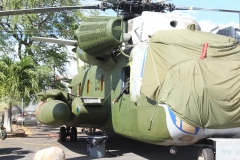