Part of a proud tradition of extremely versatile Navy helicopters, the H-3 Sea King has fulfilled nearly every role possible, from its designed antisubmarine warfare mission to serving as the executive transport for every President since John F. Kennedy.

First flown in 1959, the SH-3 was designed to provide the Navy with a powerful, amphibious, ASW helicopter that could act as both hunter and killer; due to weight limitations its predecessor, the HSS-1, had to have one aircraft act as the hunter with a dipping sonar, and another as the killer with torpedoes.

At the time designated HSS-2, the helicopter began reaching the fleet in 1961. The basic SH-3 ASW models were progressively upgraded with more powerful engines and improved sonar gear. In contrast to many later ASW aircraft, which used disposable sonobuoys, the SH-3 used a dipping sonar. While this required it to hover in place to lower and raise the sonar transducer, it also meant that its patrols were limited only by fuel, and not by the supply of sonobuoys. Many SH-3s were later stripped of their ASW gear and converted to cargo and utility helicopters, including both of the Museum’s examples.

The type’s most public role is undoubtedly as the executive transport. The role, first shared between the Army and the Marine Corps, has been fulfilled solely by Marine squadron HMX-1 since 1976. The aircraft modified for presidential transport are known as VH-3s. President Kennedy was the first to fly aboard a VH-3A in 1962, and the A models continued in limited use until 2006. It was supplemented by the VH-3D in 1976, and fully replaced by 1978 – and those 1976-production D models continue to fly presidents to this day.  They are slated to finally be replaced by the new VH-92 in 2020, after almost six decades of duty for the VH-3, a staggering record. 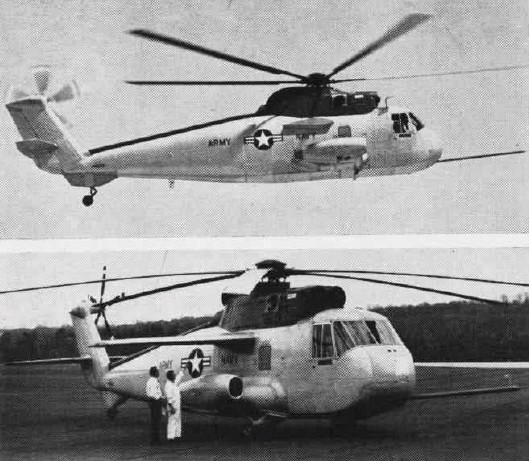 A little-known chapter of the SH-3 story is its use as a test platform. In 1962, a stripped-down SH-3A with tiny, lighter landing skids set a world speed record for helicopters of 210 mph (183 kts, 338 kph), an impressive speed even today, and a huge improvement over the A-model’s normal maximum speed of just 155 mph (135 kts, 250 kph). Not long after, an early SH-3A was returned to Sikorsky, who worked with NASA to create a “compound” helicopter, adding wings and jet engines in pods mounted on the fuselage side. It ultimately reached a speed of 243 mph (211 kts, 391 kph) in level flight and 265 mph (230 kts, 426 kph) in a dive. This airframe was also later modified to test the concept of a “pusher” tail rotor, which was rotated 90 degrees to face the rear.

In addition to hunting submarines, Sea Kings also performed minesweeping, search and rescue (including during Vietnam), plane guard (crash response during aircraft carrier flight operations), missile and torpedo recovery, mail and supply delivery, and disaster relief missions for the US Navy. The type was also used by the US Air Force, as both CH-3 transports and as the famous HH-3 “Jolly Green Giant” combat search and rescue helicopter. The Sea King was heavily used by other nations, including in roles that the US Navy never explored, like airborne early warning.

In all, the militaries of fifteen nations would use the Sea King, including the United Kingdom, Canada, Brazil, Italy, Spain, and India, and more than half of those continue to fly the type today. Between Sikorsky and other licensed manufacturers, almost 1500 were produced.

This Sikorsky workhorse also saw significant civilian use, there known as the S-61. To this day old military Sea Kings, some half a century old, are being bought, restored, and flown again to serve as transport, heavy-lift, logging, and firefighting helicopters. An S-61 is currently flying out of Kalaeloa Airport, and lucky Museum visitors may be there to watch her take off over the now-still rotors of her forebears.

Accepted by the Navy on 31 August 1960, 148043 is the 21st example produced and one of the oldest remaining Sea Kings in the world. Old enough to have originally been designated an HSS-2, she was re-designated an SH-3A in 1962, upgraded to an SH-3G in the late ’60s, upgraded again to an SH-3H in 1976, and converted to a UH-3H in 1995. In her nearly fifty years of activity she saw duty with many squadrons and multiple aircraft carriers, including the Constellation, Carl Vinson, Ranger, and George Washington.  She is one of two Museum helicopters to have flown with presidential transport squadron HMX-1, with 8043 being assigned there during the end of the Nixon administration and the beginning of Ford’s. She completed her service with a stint at the Pacific Missile Range Facility on Kauai as “Outrider 20.” The PMRF donated her to the Museum in 2005. Her data cards show her retiring with over 13,300 hours of flying time.

Both aircraft are on loan from the National Naval Aviation Museum, Pensacola, FL.