The Stinson Sentinel – designated the L-5 in Army service and the OY in Navy service, and known popularly as “the flying Jeep” – was a light observation, artillery spotting, liaison, and medevac aircraft that first flew in 1941.  It was the largest of the US military’s quartet of famous light observation aircraft, twice the empty weight and half again the max weight of the Taylorcraft L-2, Aeronca L-3, and Piper L-4.  Being roughly the same wingspan and only slightly longer, most of its increased weight was due to an engine with triple the horsepower of its cousins and enough fuel to allow it a substantially increased range.

The Sentinel’s increased power gave it not only a higher speed, but also incredible takeoff performance, being able to leap into the air in just a few hundred feet from unprepared airfields.  Pilots reported it easy to fly, but occasionally tricky to land, being an aircraft that rewarded a firm hand.  Observers in the back seat were gifted with fantastic fields of view, thanks to its generous window glazing and high wing.

One major advantage to the Sentinel was its large secondary side door, behind the observer’s door, which allowed enough space for an injured soldier on a stretcher to be laid down inside.  In the days before helicopters were available for medivac missions, an aircraft that could take off and land in small fields could mean the difference between life and death for a soldier or Marine who could not be evacuated by truck.

Among its many achievements, the Sentinel was one of the few non-seaplane aircraft to operate from ships during World War II.  During the Battle of Okinawa, Sentinels modified with hooks would snag a sling hanging from a cable which was suspended above an LST, a setup known as the Brodie Landing System.  See a video of the system in use from our friends at the Smithsonian National Air and Space Museum:

One additional anecdote of the Sentinel is directly related to NAS Barbers Point squadron VR-21, who inherited and briefly operated an OY-2 at a detachment in American Samoa, where it was used to spray for bugs!  Retired a few months later, the aircraft was brought back to Barbers Point (and later to San Diego) in style as a “VIP” passenger aboard one of the squadron’s R5Ds.

The type saw service in all theaters of the war in World War II, including by our allies in Britain.  Hundreds were given to friendly countries rebuilding following the war, including China, the Philippines, Greece, India, and even to former enemies Italy and Japan, and many of those retained in US service saw action again in the Korean War.   Following their military service, the type was extremely popular among the Civil Air Patrol, and in recent years have found a niche among private owners as a “baby warbird.”

The Museum is immensely proud to have acquired OY-1 BuNo 03969, as she was assigned to NAS Barbers Point in the waning months of the war, allowing her to retire at her first duty station.  While preparing for the invasion of Japan, hundreds of OY-1s were stockpiled here.  The war ended before they were shipped off to combat, and 03969 remained in Hawaii for a while as a liaison and “squadron hack” aircraft before being sent to the east coast for overhaul.  Her post-service career mirrors those of many other Sentinels: flying for the CAP before being sold into civilian hands, she later served as a glider tug and pleasure aircraft.  Mike Dillon of Texas was her last owner before the museum, and his investigations uncovered her Barbers Point history.  When he was ready to part with her, he reached out to us, and we were able to bring her home.  She is currently under restoration to flying status. 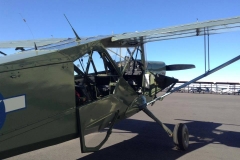 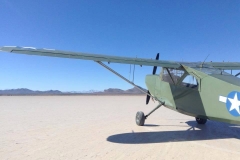 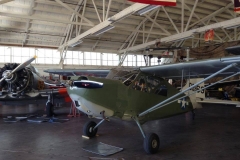 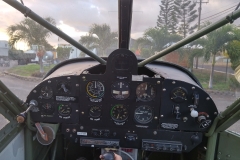 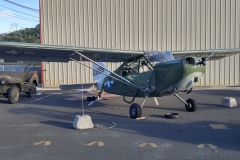 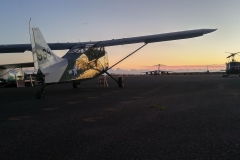