Tasked with transporting people and cargo throughout the Pacific region, and occasionally even further afield, the men and women of VR-21 – flying older aircraft to destinations thousands of miles from home, often at night and in questionable weather, and occasionally in combat zones – built a reputation for maintenance and safety that set records and was the envy of the fleet.

The squadron has it direct roots in the waning months of World War II, when the Navy began modifying aircraft for use by Navy and other governmental leaders to reach the far-flung bases in the Pacific area of operations.  On 9 January 1945, the Navy formed Pacific Fleet Flag Transport Unit One at NAF Honolulu, and a second unit at NAS Agana, Guam. While the dedicated VIP transports were being modified, these units flew a scrounged collection of other transports, including a number of PB2Y flying boats.  The two units were soon merged into a single Utility Transport squadron, VRJ-1, on 20 April 1945.  While they retained a number of the Catalina flying boats, the Douglas R5D quickly established itself as the squadron’s primary aircraft type.  While most of the squadron’s mission during this time were highly secret, its public highlight during this period was in providing transport to Admiral Nimitz and his staff to the surrender signings in Tokyo.

On 15 November 1946 the Navy redesignated the squadron VRU-1, and in 1948 it started receiving cargo-configured aircraft that better reflected its designation as a utility squadron.  In keeping with this mindset, when the Navy underwent their next round of redesignations, the squadron received the title Air Transport Squadron Twenty-One: VR-21. The following year, budget cuts forced the closure of NAF Honolulu, and the squadron relocated down the shoreline to NAS Barbers Point.  The squadron’s first flight from their new home lifted off on 1 April 1949.  The following year it inherited detachments in American Samoa, the Philippines, Guam, and the Marshall Islands from VR-23, and established detachments in Haneda, Japan and Midway Island during the outbreak of the Korean War.

The squadron suffered its first fatal crash on 20 September 1950, when R5D-3 BuNo 56496 winged-over and crashed shortly after takeoff from Kwajalein on a moonless night. 7 crew and 19 passengers were killed.

The Haneda detachment would receive one the squadron’s oddest aircraft in 1950: P2V-3Z Neptune BuNo 122986, which was a patrol bomber converted to a “combat VIP” aircraft with passenger seating and an armored cabin.  It flew across the theater for the duration of the Korean War.  The Haneda detachment also became the first VR-21 personnel to engage in COD (carrier on-board delivery) operations in April of 1951, when they received six TBM Avengers, most flying from Itazuke Air Base.  However, it would soon lose all of these aircraft, as Philippines, Guam, and Japan detachments were all transferred to the newly-formed VR-23 on 30 August 1951.

VR-21 began transitioning to the larger, more powerful R6D in November 1952, enabling the squadron to fly non-stop to Japan.  By the end of the following year, all of the cargo R5Ds had been replaced.  Further changes came in 1957: first, a name change to “Fleet Tactical Support Squadron Twenty-One”; and second, a homecoming of sorts, as VR-23 was folded back in to VR-21, including its COD aircraft at NAS Atsugi (now TF-1 Traders, the TBMs having been passed to the Japanese Maritime Self-Defense Force); and third, the transfer of a COD and VIP detachment at NAS North Island from VR-5.  The squadron now boasted some 37 aircraft.

One notable mission during this time frame was the transport of the remains of six “unknowns,” two from World War II and four from Korea, in May 1958.  One of each was selected and interred alongside the Unknown from World War I at Arlington National Cemetery.

Operations in support of the escalating conflict in Vietnam began in the early 1960s, initially strictly in support of fleet operations, including delivering nuclear weapons.  During this time VR-21 received its first C-130 Hercules aircraft.  While the squadron would later operate the type in its normal cargo and passenger role, these first two Hercs were the first incarnation of TACAMO, the communications lifeline with ballistic missile submarines at sea.  The TACAMO detachment would later be transferred to VW-1 at NAS Agana, Guam, before eventually returning to Barbers Point as the Ironmen of VQ-3.

After several years of being designated the safest squadron in the fleet, VR-21 suffered its last casualty when C-1A BuNo 136784 crashed shortly after catapult launch from the USS Independence.  One person among the 10 passengers and crew perished.

Despite losing both detachments at Atsugi and Alameda in October 1966, the squadron tallied record numbers of flight hours in support of the Vietnam War.  During the Battle of Khe Sanh, the squadron deployed seven aircraft to NAS Cubi Point in the Philippines, delivering 150 tons of cargo in the first two days, and 500 more in the next 90 days despite having to take off and land from taxiways due to runway resurfacing.  VR-21 flew well over a thousand flights in to Vietnam over the course of the conflict.

From June 1969 to April 1971, the squadron’s C-130s were assigned to VRC-50, while VR-21 struggled to keep their C-118s – some now nearing twenty years old, and parts becoming scarce – in the air.  After their return, the C-130s bore the brunt of the squadron’s operations, flying from as far afield as the Mediterranean, and assisting with the final withdrawal of Navy personnel from Vietnam.  Though VR-21 received a new title in 1976, now being Fleet Logistic Support Squadron Twenty-One, its days were numbered.  By the end of that year, its flightline consisted of just three C-118s and three C-130s.  On 1 February 1977, the final bell tolled: the Air Force’s Military Airlift Command would now assume all airlift operations.  The final few C-118s were flown off for decommissioning.  Official disestablishment came on 30 March, when the squadron’s C-130s were handed over once again to VRC-50.

On 25 February, VR-21s last C-118 – BuNo 131609 – sat on the flightline bearing a massive lei and a sign with the challenge “TOP THIS: 358,836,” the record-high total of the squadron’s safe flying hours.  the squadron’s farewell message declared it “our legacy to naval aviation. It is the last wish of VR-21 that its safety record be broken by every squadron in the Navy.” 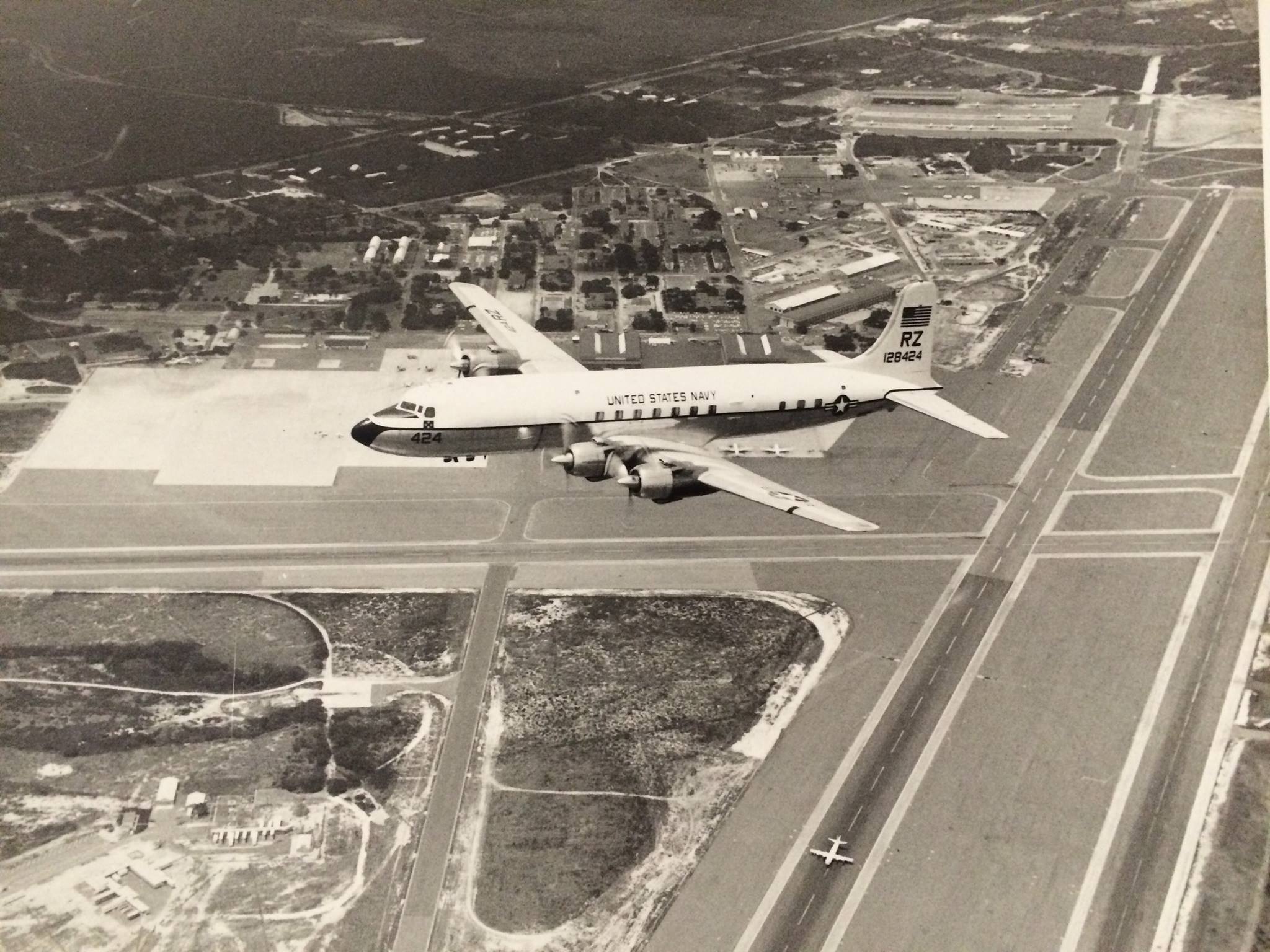 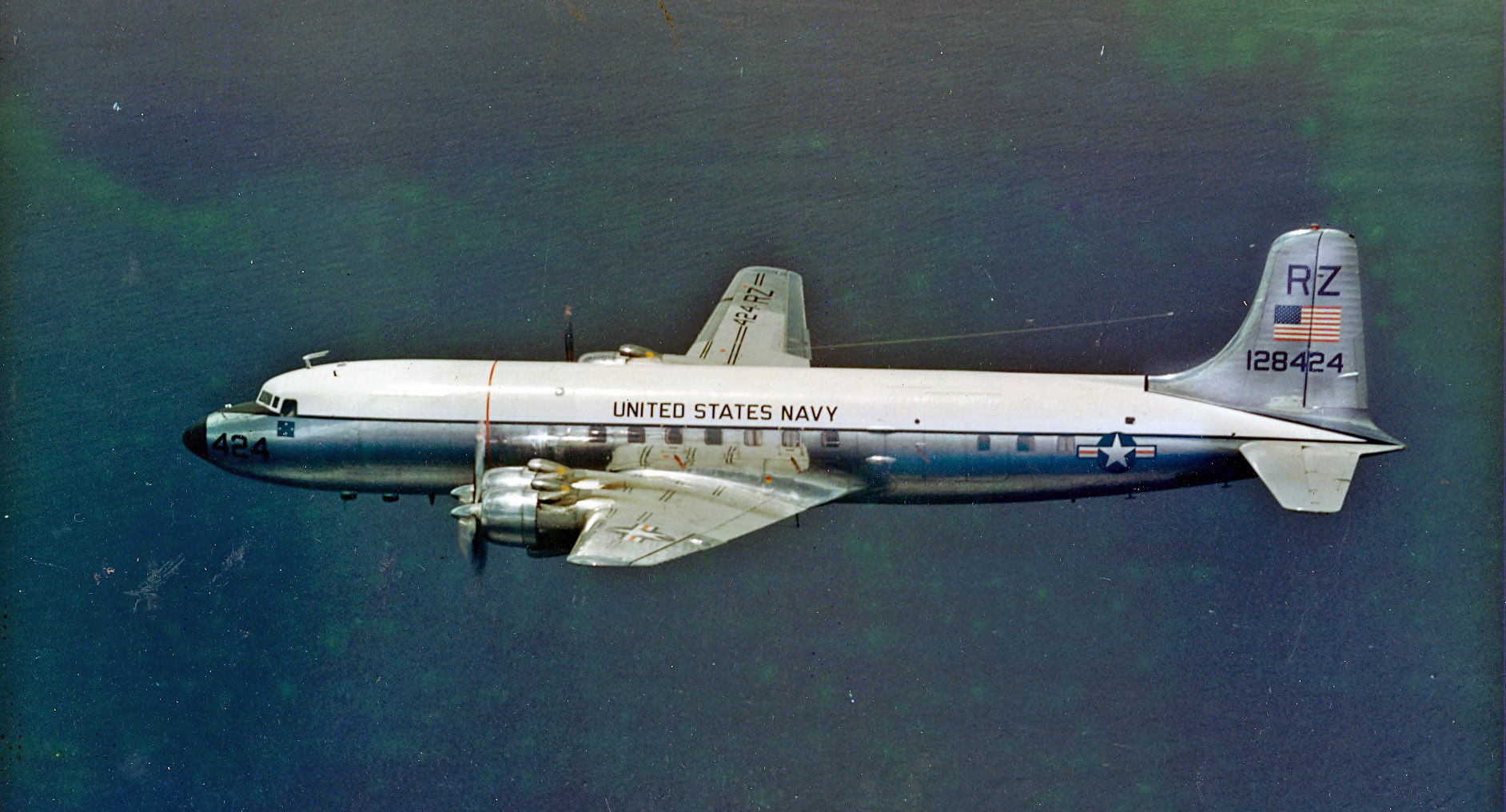